Dermatomyositis- The disorder of connective tissues 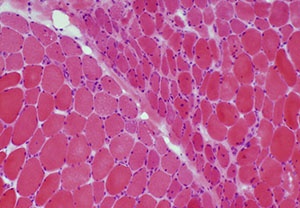 We all love our skin and pay attention to every accidental small scratch on it. Dermatomyositis is a rare inflammatory condition characterized by muscle weakness, skin rashes and inflamed muscles. Both adults and children can be affected from dermatomyositis. Adults between ages 40 to 60 are more vulnerable to get the dermatomyositis, whereas, the children are mostly affected between ages 5 to 15. Females have doubled the chances than men.

Though, there’s no treatment option available that can give the total cure, its symptom management can be done. With the help of intervention, the skin rash can be cleared and you can regain the muscle power and strength. The prognosis is not too satisfactory, but early detection of the disease can save you from bigger life-threatening complications.

The causes of Dermatomyositis

Despite its exact cause not being known yet, it’s believed that disturbed immune system reactions trigger the disease. When your immune cells unconditionally attack your muscle cells, the inflammatory cells around your blood vessels cause the abnormal destruction of your muscle tissues.

However, those who have a strong genetic history of dermatomyositis are more prone to get the disease. Underlying cancer in elderly, infectious or toxic agents and several drugs are other potential causes of dermatomyositis.

The symptoms of Dermatomyositis

One of the clinical sign is the bluish-purple skin rash on nails, elbows, chest or face. Muscle weakness would also occur and may become worst as the disease progresses. Starting from your neck, the muscle weakness will correspond to arms or hips and can be on both sides of your body. Also, other following symptoms are:

The Amyopathic Dermatomyositis is a rare type characterized by rashes, but not muscle weakness.

To confirm the dermatomyositis and eliminate the possibility of other related diseases, your doctor will ask about your medical history and symptoms. Also, the physical examination will be done, if needed.

Though, skin rash is the classic symptom, your doctor will prescribe the following tests and measures to be done:

With the help of these results, doctor will make the final diagnoses and start the treatment.

One particular cure for the disease has not been developed yet, but several medications along with alternative medicine can improve a patient’s condition. Corticosteroids are the most effective medicine for treating the dermatomyositis, because corticosteroids calm downs the hyperactive and abnormal immune system, the inflammatory processes in your body is minimized and this enables the long-lasting or even permanent remission phase.

Intravenous Immunoglobulin is often prescribed when the autoimmune system targets your skin and muscle tissues. Pain killers will help to ease the pain. Surgical procedure will be conducted to remove the calcium deposits. Anti-malarial medications are prescribed for curing the persistent rash. However, sunscreens are also suggested to decrease the chances of rashes and other related problems.

Physical therapy and speech therapy can also aid in strengthening the muscles and making the swallowing easier.

Many diseases can be significantly improved with the stem cell therapy. Several evidences have found the stem cell therapy to be very success as a treatment for dermatomyositis. In 2010, a study published in Scandinavian Journal of Rheumatology revealed that dramatic improvements have been noticed in those patients who had analogous stem cell transplantation.

According to a study published in 2011 in Annals of Rheumatic Diseases, the Allogenic mesenchymal Stem cell Transplantation in those who developed the drug resistance have the greater efficacy rate. So, where the traditional treatment approaches fail, the benefits of stem cell are bigger.

To make the life of a patient better and better is the eventual goal of every practitioner despite knowing the reality of their condition and prognosis. However, regular checkups and reporting any abnormality to a doctor can reduce the risks of complications.